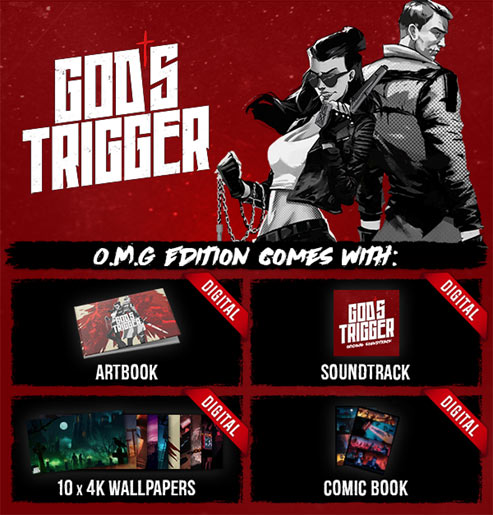 First, save the world in the most violent way possible.

Then have a look behind the scenes on how the Apocalypse was designed, take the music of God's Trigger with you on the road, and spruce up your desktop with some cool world-saving art.

When an Angel and a Demon team up to kill their way into Heaven and stop the apocalypse, bullets will fly and blood will be shed.

Play solo or in with a friend and burst through a room in a matter seconds killing enemies with a bucketload of weapons, special abilities, and melee options in a show of blood and explosions!

Each character brings their own unique powers. With a treasure trove of weapons and customizable special abilities you have the means to annihilate your enemies in just the way you like.

Two heroes working together will slay enemies twice as fast! Switch freely between Harry and Judy, the Angel and the Demon, at any moment in solo mode, or grab a friend and work together in co-op for even greater bloodshed!