As with all Pokémon game releases, there’s only one question on every trainer’s mind: which version to get? This time around, players will have to choose between Pokémon Scarlet and Pokémon Violet, but the differences between these versions go further than just the Legendary Pokémon on the cover. Let’s dive in!

Maybe you always decide on which version to get based on which cover you like more. Pokémon Scarlet has the red dragon Koraidon as its poster Pokémon, while Pokémon Scarlet boasts the cybernetic dragon Miraidon on its cover. You might have a strong preference for one of them, but it is worth it to look beyond these Legendary Pokémon as Scarlet and Violet promise very different experiences. 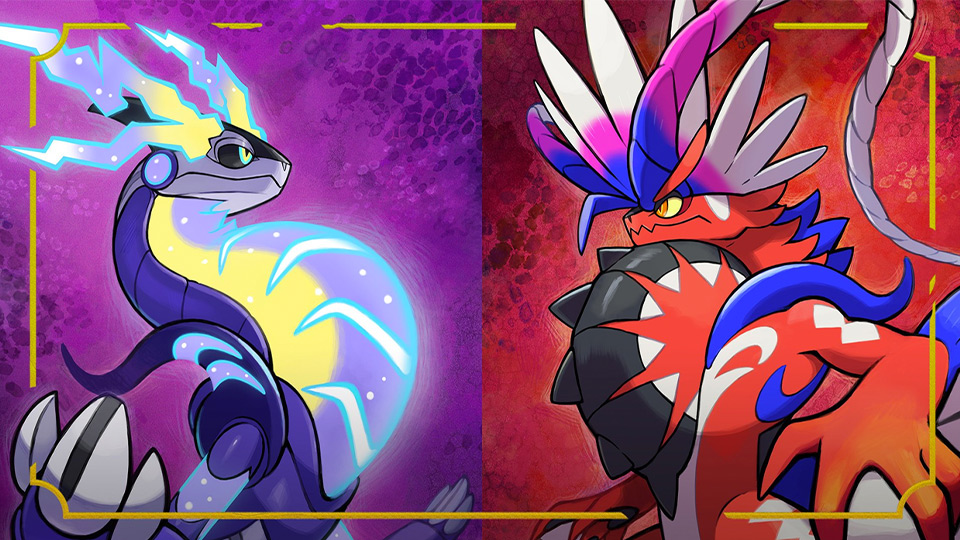 The main differences between Pokémon Scarlet and Pokémon Violet are reflected in:

We’ll cover these areas in the following sections.

The most obvious difference between both versions is the Legendary Pokémon that you will be able to catch. For Pokémon Scarlet, this is Koraidon and in Pokémon Violet it is Miraidon. Contrary to previous Pokémon games, you receive the Legendary Pokémon relatively early in your journey, as you will need it to traverse the Paldea region. Both Legendary Pokémon can turn into different forms of transportation, allowing you to speed across the land, fly through the air and swim across bodies of water. 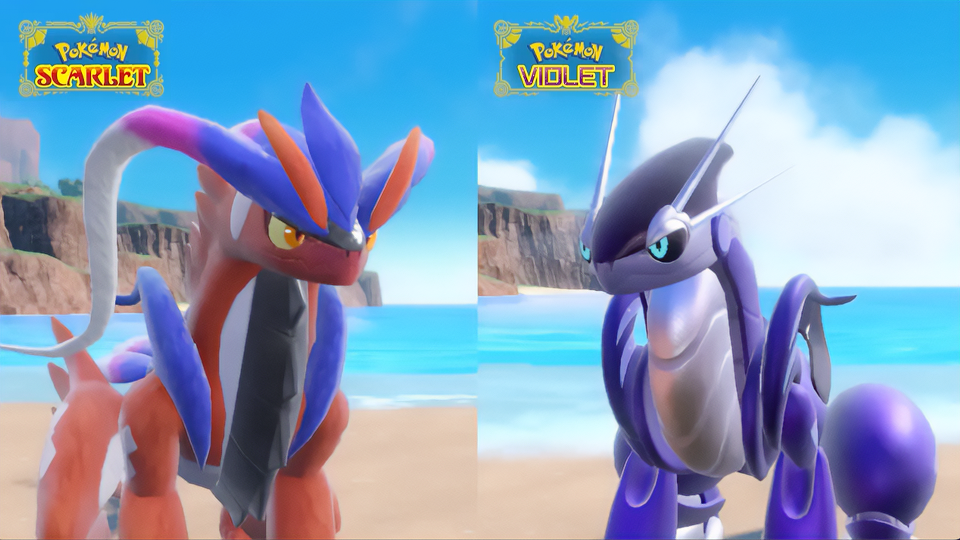 Koraidon is a Fighting and Dragon Type, while Miraidon is an Electric and Dragon Type. If you are planning on keeping your Legendary Pokémon in your party, you might want to consider these typings when deciding between Scarlet and Violet.

Most players will probably base their decisions on looks, and in that case it’s worthwhile to consider all the different forms of Koraidon and Miraidon.

The most obvious difference between Koraidon and Miraidon when in this form, is the fact that Koraidon actually uses its legs in its “Sprinting Build” form, while Miraidon uses wheels in its “Drive Mode” form. 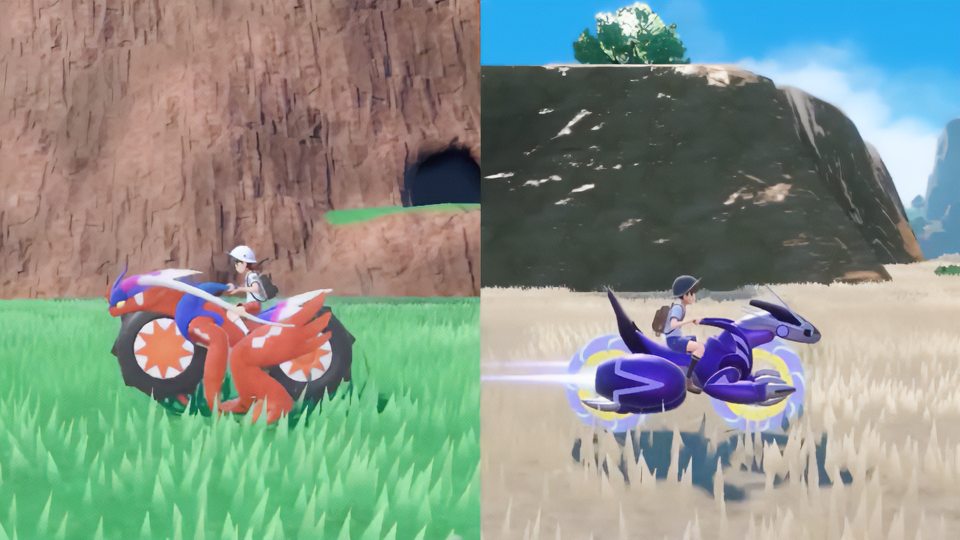 Koraidon’s “Swimming Build” has him puff up its throat to stay afloat, while it uses its legs to swim across the water. Meanwhile, Miraidon’s “Aquatic Mode” once again looks a bit more futuristic, as it seems to propel itself through the water using its wheels. 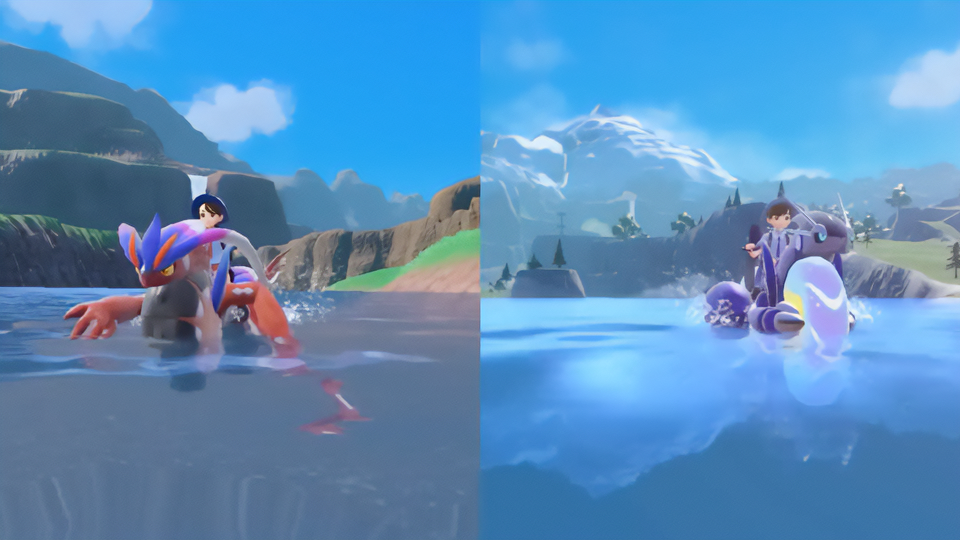 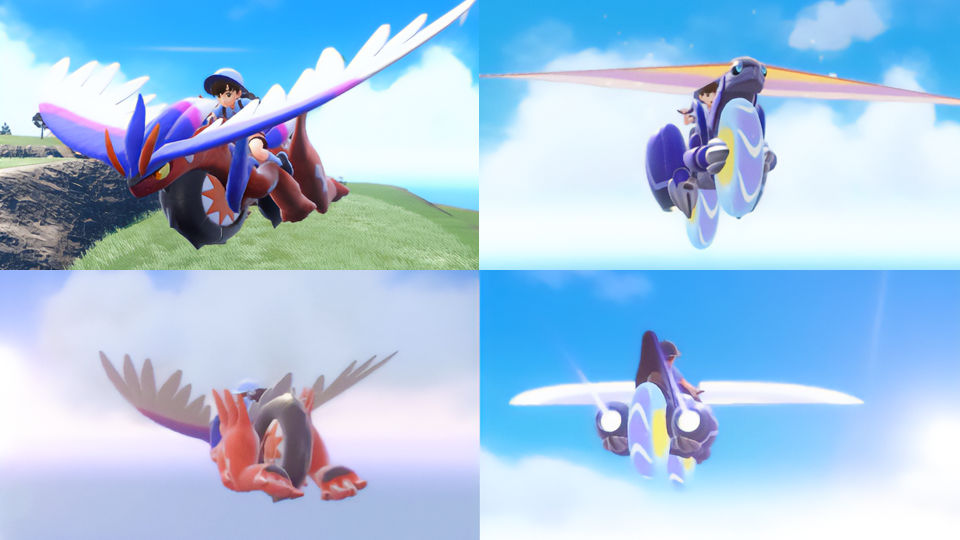 Paradox Pokémon you can catch

It’s no big secret that Pokémon Scarlet is themed around the past, and Pokémon Violet around the future. A better kept secret is the fact that you will be able to find prehistoric or futuristic versions of Pokémon that are called Paradox Pokémon!

These Paradox Pokémon are linked to the Scarlet Book and Violet Book, items that are exclusive to their respective version of the game, that contain sketches and notes from Pokémon expeditions taken long ago. 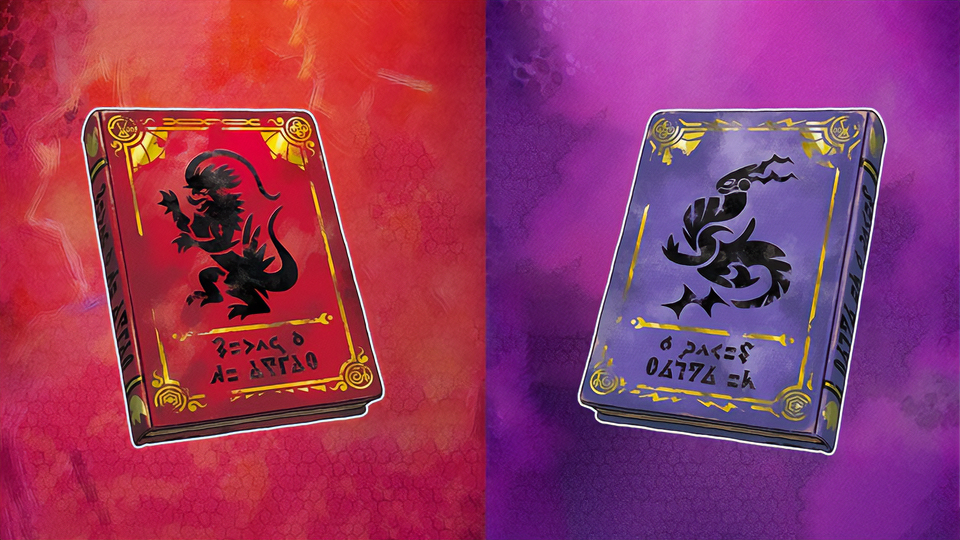 You will be able to encounter and catch the Pokémon detailed in the Scarlet Book and Violet Book, but these Pokémon are all exclusive to their respective versions.

For example, the Scarlet Book contains records about the mysterious Great Tusk Pokémon, while in the Violet Book, the notes are about a Pokémon called Iron Treads. Great Tusk and Iron Treads both happen to be an alternate version of Donphan. One looks like a more prehistoric version of Donphan, with exaggerated tusks, while the other looks futuristic and almost cybernetic. 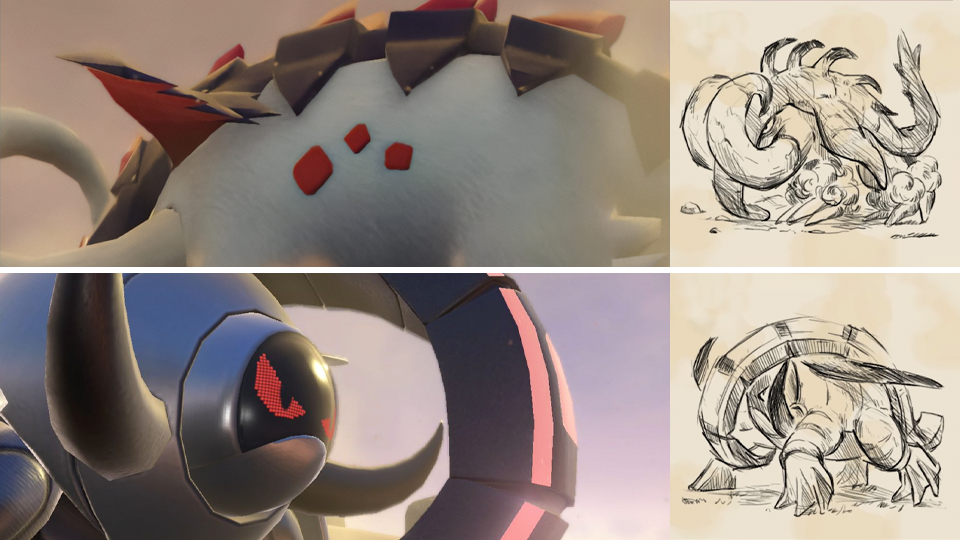 In addition to the Legendary Pokémon and the Paradox Pokémon, there will also be other Pokémon that are exclusive to their version. The only way to obtain the Pokémon from the other version is by trading online or with a local player.

Fortunately for collectors, there won’t be too many version exclusive Pokémon this time around (if you don’t count the Paradox Pokémon).

These are the version exclusive Pokémon in Scarlet & Violet that we know so far:

We will update this list when more version exclusive Pokémon are announced.

The characters you meet

Aside from the different Pokémon you’ll encounter, you’ll also meet different characters in Pokémon Scarlet and Pokémon Violet. For the first time in the series, you’ll meet a different professor at the beginning of the game, depending on which version you pick. 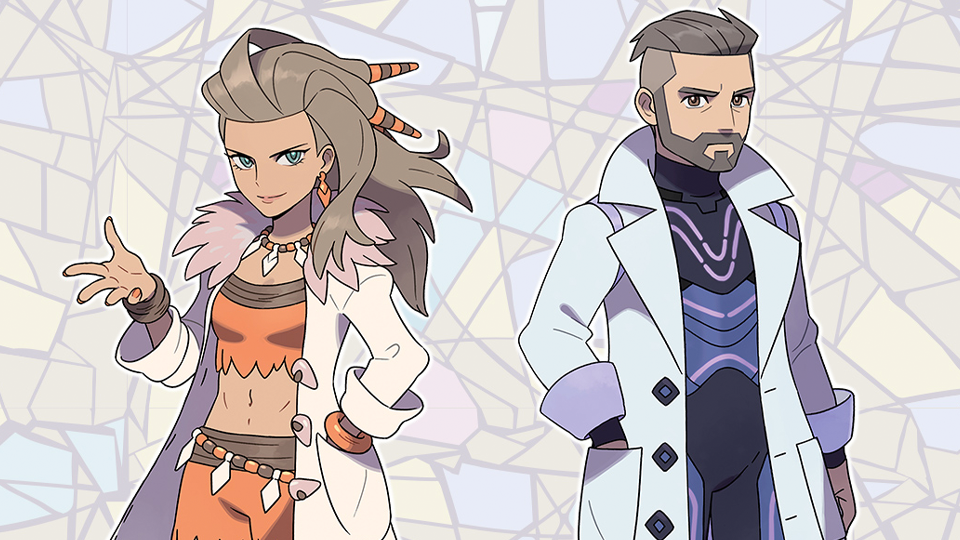 The school you attend 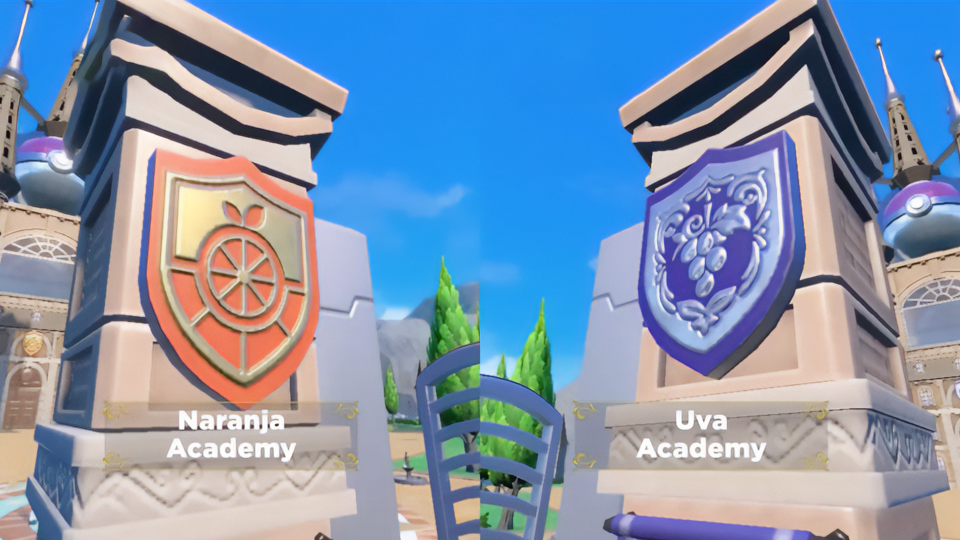 Your character will also wear similarly coloured school uniforms (more on that in the next section) and the same goes for the professors and director of your chosen academy. 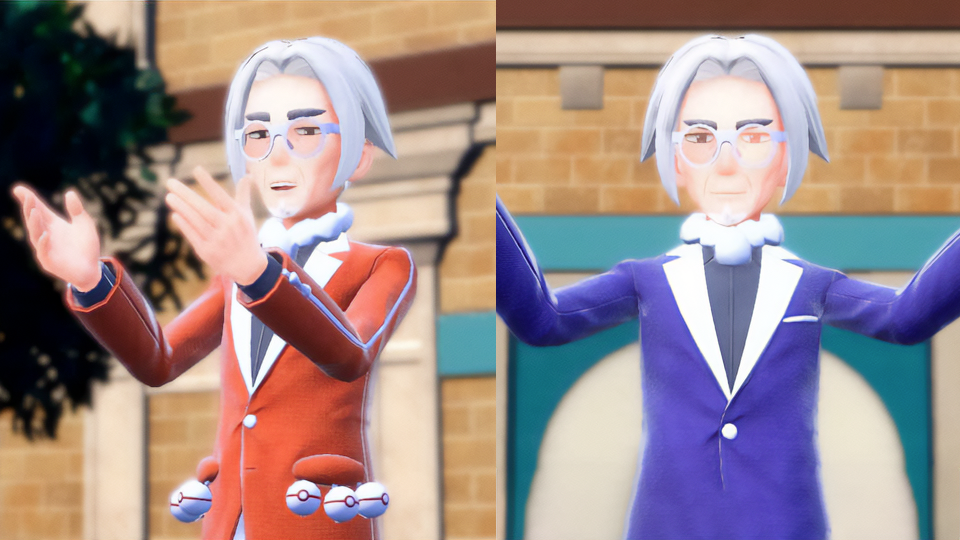 The clothing you wear

As an official student of Naranja Academy or Uva Academy, you are expected to dress appropriately for school and that means: school uniforms! Bad news for real fashionistas because the fashion options in Pokémon Scarlet and Violet are a bit limited compared to previous games.

The differences between costumes in Scarlet and Violet are minimal, but the colours are certainly not. In Pokémon Scarlet, your character wears a blue hat, an orange tie and orange striped shorts with black shoes and matching backpack. In Pokémon Violet, the hat is white, while your tie and shorts are a deep blue, with black socks and brown shoes and backpack. 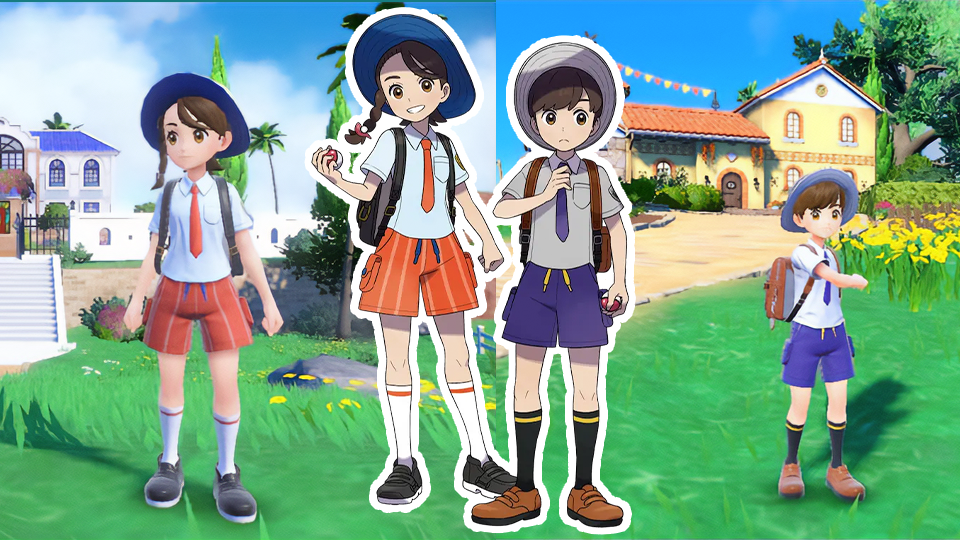 There are different outfits in the game, but the customization is not as deep and you are restricted to school uniforms. So if you care about the looks of your character and you have a specific preference (or aversion!) to the colour orange or blue, then you might want to reconsider your choice!

Which version should you choose?

Ultimately, your choice between Pokémon Scarlet and Pokémon Violet will depend on these three things:

You will be spending a lot of time with either Koraidon or Miraidon, so this would be the most important deciding factor. After that, look at the designs of the Paradox Pokémon that we know so far, and decide whether you like the ancient versions of Pokémon more or the futuristic ones. And finally, ask yourself the question: orange or blue shorts?

Don’t worry too much about the Pokémon that are exclusive to each version, as trading Pokémon has never been easier. Just don’t forget that you will need a Nintendo Switch Online subscription to play and trade online with other players!

Save 15% on Pokémon Scarlet and Violet

Made up your mind on your preferred version of the new Pokémon games? Perfect, because we’ve got a limited time offer that will sweeten the deal:

Pre-order Pokémon Scarlet or Pokémon Violet between now and November 17, and get 15% off your purchase by using code “POKE15” at checkout. Don’t miss out on this offer and start your adventure in the Paldea region at a discount. Good luck, trainer!